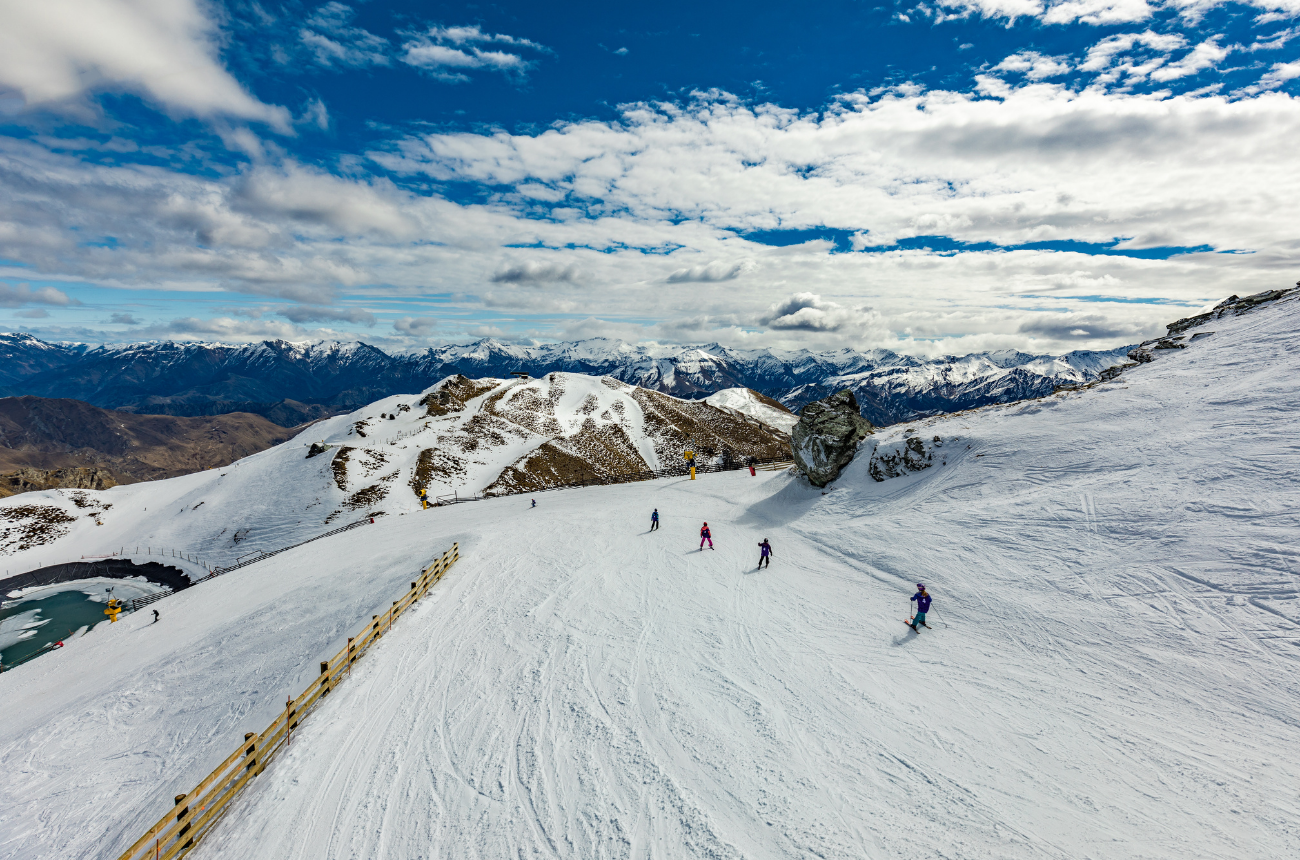 Where To Go Skiing Or Snowboarding When Staying In Queenstown?

There Are Three Main Mountains For Skiing Or Snowboarding In Queenstown.

Is there anywhere better than Queenstown to go skiing? Whether you're an experienced skier or first-timer it's hard to deny the beauty of New Zealand's South Island. The mountains are breathtaking and the activity is unmatched. Most people will say that The Remarkables and Coronet Peak are the two most popular places to ski. A little Further away, but not to be missed is Cardrona.

Each have their own unique features and attractions that make them great in their own way.

Coronet Peak is one of the most popular ski areas in New Zealand. It's known for long, groomed runs, great snow and awesome views.

Coronet Peak is located about 20 minutes from Queenstown in the South Island of New Zealand. It's one of the largest ski areas in the country dozens of runs and 3 lifts, 1 T-bar and a number of magic carpets.

Coronet Peak offers some excellent ski fields and plenty of terrain to keep you entertained all day long. The area has some fantastic beginner runs as well as some great intermediate and advanced slopes too!

If you're looking for scenery while you're skiing then Coronet Peak is a great place to go. There are some great views of Lake Wakatipu and other surrounding mountains around Queenstown. That's why it's so popular with skiers who want to take in stunning scenery while they're on the slopes!

Coronet Peak  has the longest ski season in NZ with skiing from early June to late October, so you'll be able to get your fill of snow. It's also the best place for beginners as it has lots of wide open slopes with very little challenging terrain. The resort also boasts some great off-piste opportunities which are not available at other resorts around Queenstown due to rocks when the snow is patchy.

Coronet Peak offers a variety of slopes for all levels from beginner to advanced. If you're just starting out head over to the snow sports school where their experienced instructors will get you up and running (well... sliding). There's also a beginners area with its own lift so you can learn at your own pace.

If you're more experienced and looking for some serious action, then head over to Coronet Peak full size lifts. Here there are slopes for all abilities including one designed specifically for experienced riders (Referred as Greengate's) .

The Remarkables  is also one  of the most popular ski areas in New Zealand. It is known for its mix of challenging  slopes and adventurous trails. The Remarkables has a variety of terrain from beginner through to advanced, with a good selection of runs. Plus, it’s only a 45-minute drive from Queenstown!

There are multiple ski lifts and over many trails spread across the mountain, with a vertical drop of 1,000 meters (3,280 feet). There are two terrain parks at the  The Remarkables – one for beginners and another for intermediate to professional skiers and snowboarders. Also, there are many beginner  trails located next to the resort basecamp  where you can rent gear and hit the trail on your own or with an instructor.

The Remarkables is home to one of  New Zealand’s fastest  chairlift  lift systems so you can enjoy all areas without having to ride wait on the lift too long.

There is a on slop bar located at The Remarkables ski resort. It's called The Ice Bar , and it's a great place to go if you want to have a few drinks with your friends to give your legs a rest.

The Remarkables is one of the best ski fields in New Zealand. By the fact It has some of the most consistent snow in New Zealand and has a good range of runs from beginner to advanced.

They don't call it The Remarkables for no reason, be sure to take some photos of the amazing views while at the top of the slopes.

Cardrona Alpine Resort is located in the Southern Lakes, between Wanaka and Queenstown. Cardrona has the best terrain parks and a half-pipe, so it's perfect for snowboarders and skiers who love big jumps and rails. Like The Remarkables and Coronet Peak, Cardrona has an excellent ski and snowboard school that can give you private lessons or set you up with groups at whatever level suits your skill.

Cardona is the most far away ski field to Queenstown out of the three listed here but surly is not to be missed.

Cardrona Ski Resort  has a reputation for being one of the best places in New Zealand to practice freestyle skiing and snowboarding.

Cardrona is popular with families because it has a wide variety of terrain to suit all abilities. The resort also has good snow cover thanks to its high altitude (over 2000m).  Cardrona offers a wide range of terrain for all levels, including black runs and off-piste skiing. There are also plenty of facilities on offer at Cardrona including ski rental, lessons and equipment hire.

Cardona Ski Resort has great snow, a fun terrain park and a friendly atmosphere. It has a good range of beginner runs, but there are also plenty more challenging ones for more experienced skiers. The views from the top of Cardona Mountain are amazing as well, so it's definitely worth going up there if you have time!

Cardona Ski Resort offers excellent views of Crown range mountains. The resort has 100's of hectares of skiable terrain across  linked slopes with a vertical drop of approximately 100's of meters long . Cardona also has some great snowmaking equipment to keep the slopes open with fresh  snow as long as possible

If you want some more information on Cardrona check out our Cardrona Mountain Guide.

The rich text element allows you to create and format headings, paragraphs, blockquotes, images, and video all in one place instead of having to add and format them individually. Just double-click and easily create content.

How to customize formatting for each rich text

Headings, paragraphs, blockquotes, figures, images, and figure captions can all be styled after a class is added to the rich text element using the "When inside of" nested selector system. Find out what are the biggest ski resorts in all of Australia see our full list here.

Find Out what are the biggest and in many cases the best Ski Resorts in all of New Zealand.

Curious to know what the biggest ( and in many ways the best) Ski resorts in Canada are? Check out our all in one list here.

When it comes to skiing in France, no description is worthy.You just have to experience it for yourself.France is known for its mammoth ski areas with stretches of snow-drenched terrain. Skiing in this beautiful country makes for a memorable holiday experience on one of the most breathtaking mountain ranges in western Europe. Whatever type of skiing or snowboarding adventures you desire, you’ll find it in the French Alps. Be it schussing down long stretches of runs or hammering down heart-stopping blacks, the variety of snow sports in France is unmatched.

What can a country with over 100 years of skiing history and a 60% mountain cover give you?Epic skiing and snowboarding adventures!With slopes blanketed in ample powder, awesome après-ski, and friendly locals, Austria is on many serious snow lovers’ bucket lists.